Just thought I'd talk about one of the concepts for a Patreon game.

I didn't bother elaborating on the idea with the drill girl, because I kind of guessed that people would want a more neutral character for a Patreon game before I even posted it. However, there is a certain concept at it's core that would work for many different kinds of games, so I'll talk about that, and what could be done with it. It shares some similarities with a previous idea I've had before.

Home
Basically, there would be a home base. For example, a house. This would be were you start.


World generation
Beyond the house, and the immediate area around it (such as a farm, or additional buildings), everything would be randomly generated (what is generated depends on the game.)

Relocation
Once you're strong enough, have met a condition, or have a particular item, you could choose to relocate your house to a higher level.  A higher level home base means you can explore much further than before, since your search would begin at the higher level. 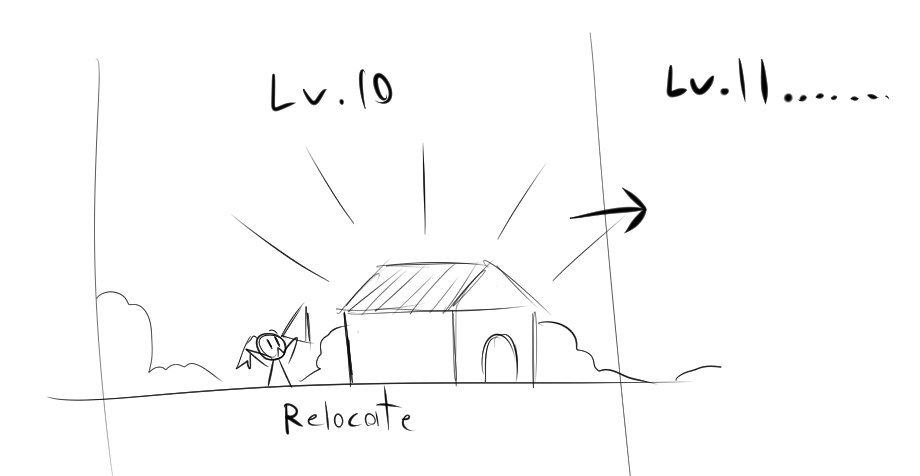 Time, Night/Day
As you explore, time would pass. The later it gets, the stronger enemies would become, even at lower levels. Not all enemies are generated when you sleep, so the farther you get from your house, the more dangerous it would be to return. Some stuff may only appear at night.

Events. Ambushes, events, towns.
Some events could be added. For example, you might be ambushed within your house, or during the night depending on your defenses (upgrading the door, windows, etc)

You might encounter travelers, who have their own events, or show up at your home.

Later on, could have towns that can be encountered, or trading camps. Not sure how these would be handled yet. Could make it so time doesn't pass in them. Could make it so once you find them once, you can go to them any time.

Possible themes, combat, etc (Some of these are mutually exclusive)

Martial arts.
Learning moves, brawling, grappling. Could base the game around a martial arts theme. Finding martial arts masters in the wild that teach you moves, finding and going to martial arts schools, etc.

Farming
Could be combined with the above. Focus on improving the base-camp, finding stuff to plant in the wild, taming creatures to use at home, etc.

Taming/ Breeding
Could base the game around taming monsters, rather than combat. Make a system that gives each monster a "personality"What food do they like? What behavior from the player do they react to? What other creatures do they like, or hate? Do they get happy in water? Do they get angry when it rains? Do they fucking despise green clothing and those who wear it, or does it make them go mad with lust? Could give every "type" of monster a base set of parameters, and then randomize some of it on a monster by monster basis.

Drilling
Not this one. Only a twin-tailed character with paws and a desire for shiny things digs with drills (You monsters :<).

Goals
There would probably be a short term goal while there's less content. (For example, finding an item)

As more content is added, there would be more end-game goals as the means to achieve them is added. For example, finding all of a type of item, beating all the bosses, etc. Depends on the game.

Personally? I'm leaning towards a martial arts game. Could still combine farming aspects and resource gathering if there's a survival angle to it. The main goal would be making enemies really fun to fight, and dynamic, so that even early on it's worth playing.

Regardless of what kind of game it is, I also like the idea of some enemies feeling like nature, and a part of the game's mythlogy, rather than just enemies. for example it could be a mushroom that comes alive in the rain, or an enemy that fears fire, etc. Stuff that interacts with other parts of the game in a dynamic way.

Whether or not it would be a rogue-lite, I don't know. Could have different modes. If it's a rogue-lite it may benefit from it, since there will be a short about of content early on. If the gameplay is naturally balanced to be repayable multiple times, it might make it easier to play with every update.