WIP images for a weapons screen... 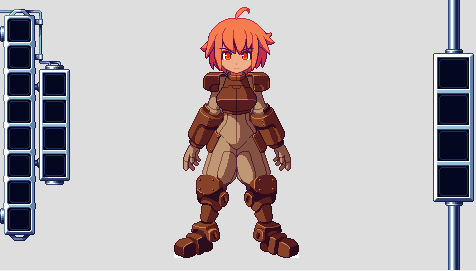 After I finish the main content of the game, I'll still have to do the CGs and music, so a release at the end of the month isn't really going to happen (At least, not the full game). It will take at least seven days to complete all the CGs, if I'm doing two per day.

So, I'll probably do the full release after I do around 11 CGs, and then add in some more in the following week. I want there to be CGs, but I know that they don't really matter to everyone, and some people would much rather see an earlier full release.

My previous health problems still haven't been sorted out, so that's still a constant annoyance. In addition to that, I've started getting a lot of wrist and elbow pain, which isn't helping. After the game is completed, I'll definitely have to start looking into alternatives to using the tablet as a mouse, like a track ball, or something else. I may also have to start practising different ways of holding/drawing with the stylus, since I don't see myself using the computer less any time soon, and I don't want to get delayed by stuff like this in the future. 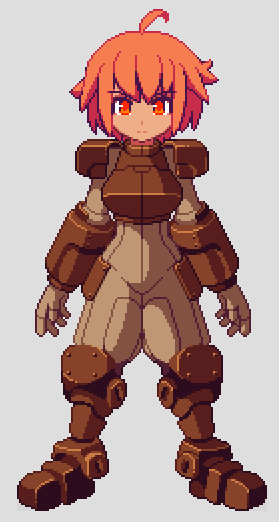 
Well, progress is moving along fine, however this month seems determined to slow me down.

First power went out for 2 days, then I had to go to two different family events, and my own birthday will be coming up. I just want to work dammit -__-

4-5 days with less work may not seem like much, but it certainly feels like it when you're actually adhering to a daily schedule. I planned on having the main game done in 21 days, with the remaining days left to CGs, fixing bugs, and polishing stuff up, However, I'll have to work more than I already am if I want that to happen.

That aside, I've decided to add another element to the game. Familiars.

They'll more or less just float along behind you and attack when you do. There will be a bunch of variations, all with a different attack, and some with other functions. I have two options with such a game mechanic, both of which would be beneficial to exploration.

1. You find them around the map like normal items, and can switch between them.
2. They transform based on what items you give them. (which would look like point-style items, like food, money, jewels, etc.)

Anyhow, back to work.

I Just got finished adding a charged melee attack to the game, which basically works like the one in Crimson Brave (which is in turn is like the one in A Link To The Past, but in a platformer). I might also add different charged attacks based on which direction you're pressing when you release the button.

I'm still considering whether or not the player should start out with all of these abilities, or most of them. I suppose it's because I've play-tested the game so much, but combat feels pretty dull without all the moves.

The problem is that if I make the skills obtainable, the player could miss a lot of them, or play through the majority of the game without some of the more fun attacks. Or, if I make them all obtainable early on, it could set up false expectations of the game, making it seem like there's going to be a lot more skills than there actually are.

Haven't decided yet. I ran into the same problem with Kurovadis's mid-air downwards attack.


Development is going about as smoothly as it can at the moment. My health issues still haven't been sorted out yet, so I'm trying to work through them as best I can.

My current plan is to limit myself to 7 days per remaining area of the game, in order to stop myself from focusing on extra content rather than what needs to be done. After the 7 days are up, I need to move on to the next area, meaning I need to work as if the result is the final product. The remaining days of this month will be used to wrap up the game, and create the CGs, and remaining music.

As much as people will joke about having another month deadline, this is literally the last month I can afford to work on the game. I can pay rent for this month, and then that's it. However, this is the kind of pressure I thrive under, so luckily it doesn't stress me out too much, health issues aside.