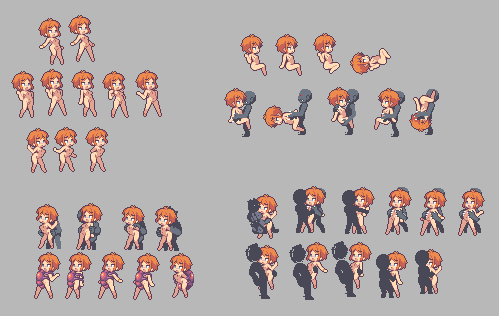 More or less settled in to the new place.

I Had a week or so where I had to stop working. The same day I took some pills prescribed by a docter for something else, I had what felt like weird circulation problems. Turns out it was a muscle problem due to the hard floors in the new place, of all things.

So with that, I'm back to work again.

As far as the on-going game is concerned, I've mostly been working on some of the stuff that will be shared with other games. That includes the dialogue system, the animation/sound editor, and a couple other things.

I've also been messing with the run animation here and there, since it's one of the most important things to get right before doing clothing. Trying to decide how I want the head movement to be.

I'm also still trying to decide how I want to handle clothing layering. My initial plan was that clothing would come in the form of entire outfits, as opposed to individual pieces. This means that an alternate outfit sprite would include the body itself, as opposed to layering individual clothing sprites over a nude body.

If clothing includes the body, you could also have the style of animations be entirely different. For example if you have a more "seductive" outfit, then a crouch animation could be a lewd kneel as opposed to a "combat ready" stance of knight armor. Whereas if clothing is a separate layer, then modding is also more doable, since you could modify the player sprite and still have all the clothing fit. The middle-ground would be that there are base sprites for different things (seductive, combat, normal, etc), however this would still lock you down to specific templates, and mixing certain kinds of clothing would be more work unless they are also locked by type.

Not sure yet. I'll probably do the base sprites, and then I'll probably decide once I've tested out an outfit or two.
Posted by Kyrieru at 5:56 PM 19 comments: