Progress on the template is going along fine. Feels like the entire process is just thinking back to every time I thought "I wish I had _____  instead of doing it this way" while working on a game. The tough part is deciding how to do things in such a way that it won't come back to haunt me later.
Other than that, I'm still in the midst of deciding what kind of game to make. It basically comes down to the main character's mobility, and whether it will be more platforming oriented like say, Castlevania/megaman, or more combat oriented. It'll be a platformer either way, though.
At the very least, however, I know it's going to be a fantasy setting, so I've begun doing some concepts for the main character, keeping in mind that there will be clothing loss based on damage in the next game. 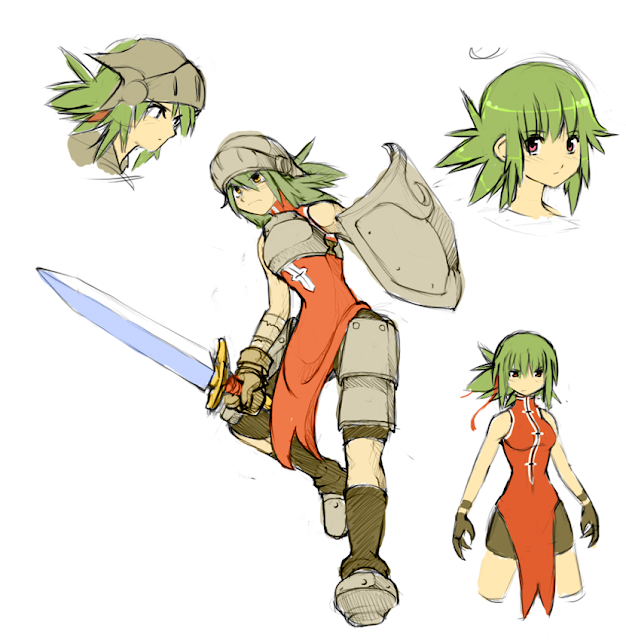 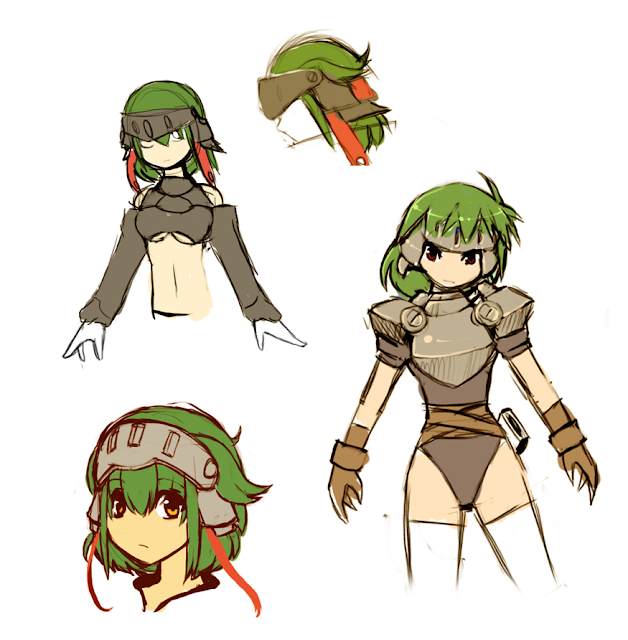 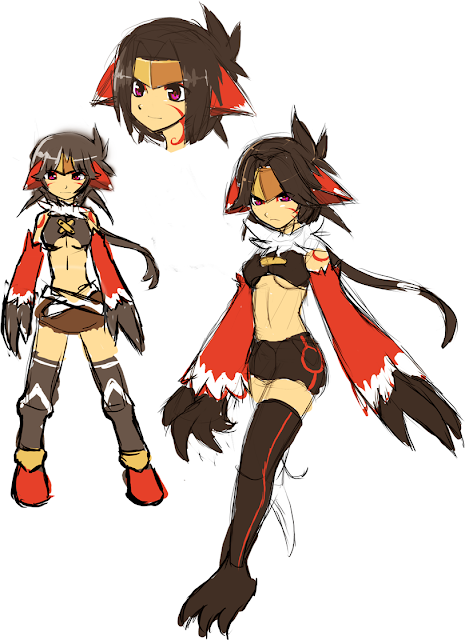 That's about it, really. I should have a more solid idea of what I'm going to do within the next week or so. For now I'm still just riding out the money from my previous job as a bit of a break, so there's there's no real rush at the moment. I'll be sure to make it clear when I've begun working full time on the game, and the aproximate development cycle. However it won't be more than a month before I start.
Anyhow, until next time.
Posted by Kyrieru at 1:26 AM 121 comments:

Well then, where to begin..

Needless to say, Kurovadis was a massive success. If Kurovadis was a test, I'd say it proved one thing beyond a shadow of a doubt; not only is working on these games as a career possible, it's actually a realistic alternative to working in the mainstream game industry. I've said it before and I'll say it again, I have everyone who purchased the game to thank for it, and I don't plan on wasting the opportunity.

Kurovadis took around four months to complete while working on it off and on, so I figure that four months is more than enough time for me to make a far superior game, working full time. I'd like to streamline my process a bit before attempting something more complicated with a longer development cycle.

As for what kind of game it will be, I don't know any of the specifics yet. However, it will be a linear platformer with far more content than Kurovadis, and much higher quality graphics. Rather than simply going from room to room, I'd also like to come closer to how old school platformers used to be, where transitions between parts of the level were seamless, backgrounds changed, etc. There will also be a story, however limited, and there will be an English and Japanese version. (My games will never have spoken dialog, so I'm just talking text.)

Curious Factory, the DLsite distributor, has told me that it would cost $0.15 per word to translate a game into Japanese, so I'm using that as my basis for cost, even if I don't get it done through them. The other option is working with a visual novel translator. Either way, with the number of DLsite sales, I more than owe it to Japanese players to have a Japanese version, regardless of the cost.

Unlike my previous attempts at making games, this one is going to be completely on paper and planned out before I start anything, so it won't be like Kurovadis where I had something that was playable within a week. This will be the first time where I don't have to cut any corners due to time, so I don't want to waste any time redoing things.

As for what I'm doing now, I'm currently working on a template for future games. This means implementing features that should be in every game from here on out. If you have any suggestions for features, feel free to make a request. Though I will say that the following will be in it,

As well as a bunch of other stuff I can't think of at the moment. All in all it's just organizing everything I use in such a way that it's more accessible and easily manipulated to suit any game's needs, and finding a standardized way of having everything work together.

I suppose this is less interesting, but for those of you who are interested,

To give you an idea of the amount of money I've made, after the sales die down in a couple weeks it will probably be around $20,000. However, I have to pay both sales and income tax, which comes out to around a third of what I make. This means that in the end, I'll have to pay around $6000 in taxes, bringing it down to $14,000.

Now, this is were things get way out of my league. If I register as a business, I can get tax deductions on some of my living expenses, and anything else related to my company. This is also where it starts making sense to pay for voice actors, translations, or other things, because there are tax deductions when you pay somebody for a service being used for your company.

Of course, there's no working under the table here. If I plan on doing this for years to come, I'll have to hire an accountant, keep records, and make sure things are done right. I may go into some detail on this once I've actually gone through it myself.

Edit: Polos15 reminded me of something I didn't even consider. DLsite charges sales tax already, included in the price, so I don't think I'd have to pay sales tax, just income tax, so it will probably come out to less than a third.

Last but not least, I frequently get questions about working with game maker, getting started in game development, etc. After I've finished more of the template and decided between the many methods I've gone through at this point, I may put together some tutorials on various aspects of game development, both for H games specifically and in general. I also don't see much reason why I couldn't release the template for people to use. We'll see what happens, I suppose.

Anyhow, that's it for now. In terms of release dates and the like, I have no idea. Right now I'm getting things sorted out in terms of hiring an accountant, registering as a business, deciding what I want to do in terms of gameplay mechanics, working on the template, and taking a bit of a break. I'll post an update in a week or so, probably, with some sketches and concepts.

Buy on DLsite
It's up on the Japanese DLsite now.
http://www.dlsite.com/maniax/work/=/product_id/RJ093841.html

Buy from my blog
To buy the game from me directly, first download the demo. (V6)
Demo
Then, buy the game from this site. After you've bought the game, click "back to overture interactive" for your download link. Place the file you get in the same folder as the Kurovadis demo in order to unlock the full game. Must be used with V6 (The demo listed above)
http://overtureredirect.blogspot.ca/

Kurovadis has been on sale for about two days now, and things were pretty hectic for a while. I spent the majority of my time reading comments (from everywhere), fixing bugs, responding to emails, and getting the game ready for DLsite. However, all in all things are going pretty smoothly.

I'm going to hold off on sales figures for now, but I will say that I've made enough to do the next game full time, though just barely. Sales have begun to slow down after the initial release, so hopefully DLsite will help me reach the 1000 mark once it's released. However, the important thing is that I can begin working on the next game, and I have all of you to thank for it.

Also, a big thanks to anybody who donated, I really appreciate it.

The Next Game
Since I don't know for certain how much time I'm going to have to work on the game, I can't really plan it out yet. So instead, I'm currently working on creating a sort of template for myself. That is, things that will be in every game from here on out regardless of what kind of game it is. The goal is to have a sort of standardized toolset to work with each time in order to reduce the development time. Things such as,

-An option screen that saves config settings in a file separate from saved games. Settings like screen modes, volume controls, etc.
-A CG gallery.
-Multiple Save Slots.
-Transitions, screen effects, etc.
-Dialog system (that can be easily manipulated for any game or situation)
-Cutscene system.

And just in general, coming up with a standard way of doing things.

As for what kind of game it will be, I'm quite certain that it's going to be linear this time around. I'd like to further optimize the way I do everything before attempting something like an action RPG with quests and complicated mechanics. However, there are a few things I plan on doing regardless of what kind of game it turns into.

And of course, I'm going to plan the whole thing out before I start. More than anything, I want the final result to be as polished as possible.

Sorry about the wait folks. I had some stuff I had to do over the weekend.

As of now, the game is 100% finished. All that's left is for me to go through it a couple times and do some final testing. Aka, the game will be released either today or tomorrow, depending on how many issues I run into, and how long it takes me to get everything set up for selling it. (Which shouldn't be too long, since I already did most of the work)