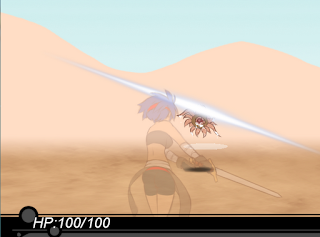 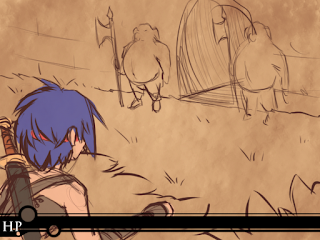 Since it's time to start animating all the enemies and it's nearing the end of the month, I figured I'd just get it all out of the way at once. This coming month, I'll be animating one enemy per day, or more, if I can. Meaning that in the end there will be 30, in total. (obviously)

As for progress, it's been so-so. Things have been going a little slower than usual since I've been trying to find optimal ways of doing things that I can use in future games, rather than the "whatever works right now" mentality I had with past games, meaning I get stuck sometimes. Ideally, when I create the next platformer, programming will just be an afterthought.

Speaking of which, I know it's still a ways off, but I thought I'd ask anyway. What game would you like to see me work on after this one has been completed? Keep in mind it will be a platformer no matter what, though.

1. Kurovadis sequel: With this, there are two options. The game could either follow the original protagonist, Kuro, or one of the other two fighters like her who have thus far been unseen (I like the idea of using all three and having a trilogy). Either way, I would be expanding on the story's universe a bit and explaining the events of the first game. The game would also have higher res graphics than Kurovadis.

2. Quick platformer: Using the template I've made for this game, I could make a short, simple, and yet solid platformer in a very small amount of time. It would take less than 2 months to complete, if I worked at it. With this one taking so little time, I'd probably focus on trying to achieve some visuals with a bit more character and style. (they wouldn't be low res)

3. Action rpg: That is, something with a bit more depth to it. For instance it might have multiple characters that can turn into weapons, and there could be a bit of a social or raising aspect to the game. Or emphasis on developing your character in a unique way.

3. Raising sim platformer: Ever play Wonder ProjectJ? Or Pacman 2: The New adventure? Combine those two and that's what it'd be. You wouldn't control the character directly, rather she would move around through areas and interact with things on her own. How she interacts with objects (or characters/enemies) would be dependent on her mood, personality, and intelligence. The player's actions would be limited to giving positive/negative responses at any given time during gameplay, which would be how the character learns. You could also tell the character to look in a direction, in order to make her notice certain things, or move in different directions. The girl's personality would also be effected through more traditional interaction with the player, such as talking to her and answering questions, or buyings gifts and items. etc.

For the joystick controls in the new game, I simply re-used the method I used in Kurovadis. I've since made it so both the d-pad and joystick are usable, so I figured I may as well go back and update Kurovadis since it's just as simple as copying it over.

Also, I fixed a bug where a particular atk+ doesn't appear. Other than that, nothing else is changed.

Even though I'm pretty sure it doesn't mess anything up, I figured I should test it before putting it on the download page anyway. Give it a try, if you'd like, and let me know if you run into any bugs (that weren't already there). Saves from V6 are compatible.

*Forgot to update on Sunday again, gives up on that plan already*

Well, not much to show. I've re-learned that I don't like spoiling things that will be in the game. So, yeah.

As for what I'm doing at the moment, I've started creating all the attacks for the player. I can create like 3+ moves a day if I work at it, so the only real limitation is running out of practical button combinations. It's funny trying to decide which move get's the classic hadouken spot.

The other tough part is making all the moves practical. What looks awesome isn't always the most balanced, after all. The last thing I want is to make a game where everything is so flashy that you get de-sensitized half way through.
Posted by Kyrieru at 1:40 AM 11 comments: 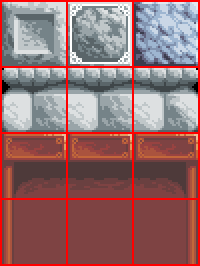 Anyhow, here are some examples of 32 x 32 tiles I've done so far. Lately I've been trying to make tiles with a bit more texture to them. Before now, some of my tiles lacked texture, so they came off as a bit too metallic. As an example, this was a tileset from Crimson Brave. 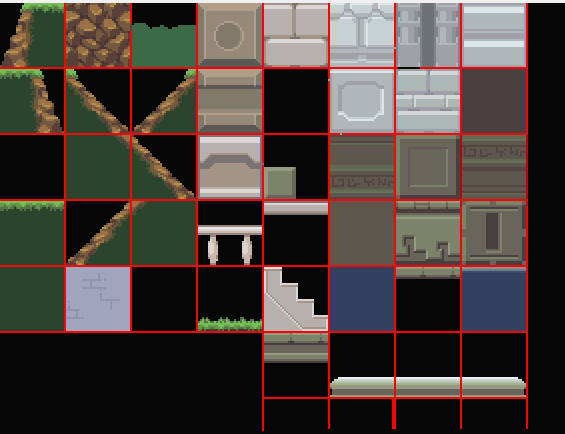 As you can see, some of those stone blocks may as well be chunks of steel, given their color.