Planned on releasing two today, but every time I sat down do this one I ended up procrastinating and working on something else instead. Sorry about that -__-

So, I'm setting a deadline for myself with the remaining animations, I have to start releasing one a week again, starting with this one. Other than that, the animation player is done, but I've still got to put all the animations into it, dividing them into loops, choosing sounds, etc. It's not time consuming, but it's just sort of tedious so I haven't done them all yet. I look forward to finally putting sound to these, because sound is pretty important to me when it comes to H-content.

Anyhow, that's all for now. Oh, and thanks for all your input on the Noaika question. Helped me come to a conclusion a little easier.


How exactly do people still not understand that I only make money per animation, and not per month, and also then go on to say that I'm begging for money, despite not having a Patreon link anywhere on my site?

I don't under the stand.

Question about customization in Noaika

Anyhow, more importantly I have a question about Noaika, particularly when it comes to skin and hair color, as well as breast size.

Originally, the plan was to make it so you could change attributes of your character through various means. For example, having sex with certain monsters changes some of your stats, but it would also change the way you look. These effects could then be re-applied with less debuffs once researched.

The second method has to do with the familiars. Basically, there are various familiars in the game, and they all look different. They have two modes; one where the familiar floats beside  you (like in the demo) and a second mode where it fuses with the player and gives passive bonuses based on it's stats instead of attacking. As a part of this, I figured it would be really fitting if you took on the colors (and maybe breast size) of the familiar.

(Also, colors are changed through code, not re-drawing)

However, there's a problem with both of these; the player may want to take on a certain appearance, but NOT want the stat-change, or game mechanic associated with it. For example, you might want red hair all the time, but you don't want to use the red-haired girl familiar, or you may not want to use the fuse mode. Not only that, but you probably wouldn't get the exact appearance you want until far into the game.

I can't really figure out how to deal with it, because this is yet another example of a situation where as a developer I want to do one thing, and yet as a player I'd probably want the opposite. As a player, I know I'd just want the ability to customize the character from the beginning, yet as a developer it just seems like a missed opportunity to not tie it into gameplay.

As it stands, I'll probably resort to the same thing as usual, which always seems to end up being "well, add an option for it".

As a player, how would your prefer customization to be handled?
Posted by Kyrieru at 9:09 PM 144 comments:

Well, I've stopped procrastinating when it comes to the GM animation player. Since I'm working on it at the moment, I figured I'd ask some questions about what you guys want.

First, though, for now the basic controls are going to be:

However, since I'm doing it in GM I'll also be able to do some more nifty stuff. Some extra features I'm either going to add or am thinking about are,

- Button to change the color palette, fighting game style.
- Do backgrounds that can be switched between (shared between animations)
- Controller vibration, because why not?
- Zoom.

I'm also thinking about doing controls that will effect the animation. For example, I could add a mode that makes the animation play at a base speed, but make it so every time you press the button, the animation sort of speeds into the thrusting part of the animation, or something similar.

The reason I can do any of the stuff above is because it can more or less be applied to any animation. I could do other "gamey" elements (pleasure meters, etc), though I don't see myself doing that unless I make an animation meant specifically for it.

All that said, is there anything specific you'd like to see me do with the animation player? Be it controls, advanced stuff, or even some sort of game mechanics?
Posted by Kyrieru at 12:51 AM 69 comments:

Here's the revised animation. Took quite a while -___-

The main thing with the expressions was making the glasses bigger than the eyes, and changing some colors.

Here's the image for the Patreon image draw. 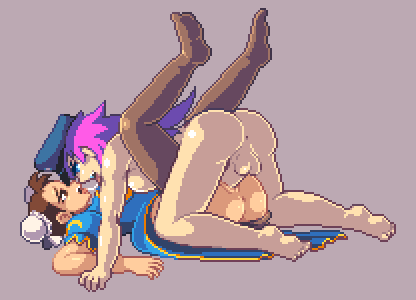 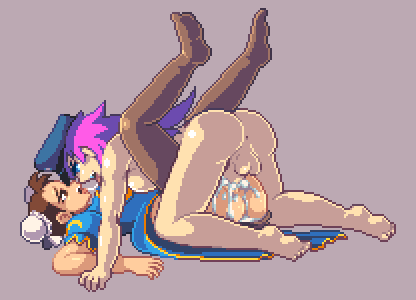 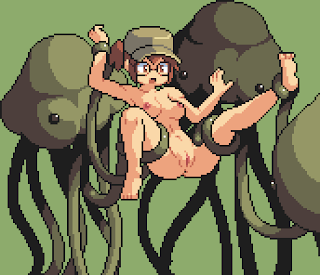