The current game has simple, snes style graphics and sounds, but I haven't decided on  the music yet.

Would you prefer that the music be made up of Snes Soundfonts (make it sound like snes music), or "higher quality" instruments and electric guitar? (Like what Kurovadis had)

Or, perhaps some sort of crazy snes/ electric guitar combo?
Posted by Kyrieru at 2:54 PM 67 comments:

A little late, but I figured I'd do a sort of end of year summary. Listing what I learned this year, and what my goals are for 2013 are.

What I learned
I learned a lot this year, but here are a couple things that stuck with me in terms of game development. Some may be applicable to everyone, whilst others are answers to more personal issues.

Think in sequels:
All too often, a simple idea turns into a massive project. Equipable clothing, leveling up, skills, branching story paths, tons of content, etc. The idea goes from being practical, to being a mish-mash of ideas you want to see in every game you play.

For me, the best way to prevent this from happening is to think of the game you're working on as if it were going to be the first in a trilogy. Decide which features are absolutely necessary to the game's design, the ones that define it's gameplay, and than simply consider how the rest would factor into the next games. Best case scenario, you end up actually making the sequel, building on what you've already established. Worst case scenario, you've completed a solid game and can move on to something else.

Get what you dislike doing out of the way:
I'm always the most enthusiastic about a project in the beginning. I get tons of work done in an extremely short amount of time because I have plenty of ideas for the game, and I tend to start off by working on all the things I enjoy doing.

However, 30% of the way through development, there's this stand still you reach where you've created a good chunk of content, but you slowly become less enthusiastic than you were in the beginning. Suddenly, you have to do a bunch of stuff you don't enjoy as much, and your lack of enthusiasm slows down your progress. What I should be doing is getting all the things I dislike out of the way while I'm still enthusiastic, so that when I hit that stand still, I can look forward to doing all the things I love most and push on.

Game Flow:
There are certain kinds of games that thrive on movement and flow. Mario World is a good example. In this game, objects are placed around the level with the goal of giving every player the best experience based on what they choose to do. For instance if there's a row of three enemies, you can try and jump on all of them in succession, but if you jump over them there just happens to be an enemy in the air you can land on instead, which you can bounce off of to reach another enemy, and so on.

The idea here is to make everything seem ideal for the player. Playtest your game, and play it in different ways. If you find it fun to speed through and jump off of a particular enemy, but doing so causes you to hit a wall, remove the wall so that the action feels natural. Or put a powerup that you couldn't normally reach at the end. Every action should feel like the beginning of a natural chain of events that occur because of the player's skill, each with it's own rewards. If you can combine this feeling with a degree of difficulty, you're good to go.

Don't playtest too much.
All too often I'll start the game, test what I need to, but then stay in-game for a couple minutes and fiddle around, or go through a section of the game again. The longer you spend in your game, the more it can get stale. This happens a lot at that "stand still" I mentioned earlier, because you've usually created a single, complete level, but you've played through it so many times that the game's basic concepts don't seem interesting anymore, and you want to work on something totally different.

Now, here's a basic outline of my long term and daily goals for 2013.

Game development
- Finish the current game in less than a month from now. (the small one)
- Create 3-4 two-month games afterwards.
- Optimize the development process, and increase the quality and consistency of what I can do in a short amount of time.

Art
- Do a manga page daily, or at least draw every day. (right now I don't draw at all anymore.)
- Begin actually studying anatomy.
- Improve consistency.

Status
Now that that's out of the way,

I'm still a bit busy at the moment, moving what's left and buying things I need. It doesn't help that I've been sick with the flu and then a cold for the past two weeks, so I haven't got as much done on the game as I'd like. However at the very least, I'm finally working on it again. Now if this damn cold will just go away, I'll be golden.

Also, thanks for all your input on Mario games. Rest assured I read everything, and I'll be sure to keep it all in mind when I start such a game (which I will, this year).

I'm moving into a new apartment in the next couple days, so I'll be a bit busy until it's all over and done with. I'll have no internet until Wednesday, but I'll still have my phone, so it won't effect support, if you need it.

That aside, I have question for you,

What is your favourite side scrolling platformer Mario game, and why? Be it for specific design choices or simply for nostalgic reasons. I plan on making an H game like Mario sometime in the future, and in the midst of thinking about it's design choices, I wondered what other people might think about the games in general. For instance,
-What are your favourite parts of a Mario game,
-What do you think is the most important thing about it's design
-What design choices do you dislike,
-etc.

This isn't so much a tutorial but rather a quick tip,

A common misconceptions that plagues beginner pixel artists is the notion that size = realism. That is, that a small sprite doesn't give them enough space to create a character with realistic proportions. However, it all comes down to economy of space.

Obviously, the sprites on the right are the least realistic. However, the answer to making them more realistic isn't to just make them larger, but to use the space differently. The sprite on the far left cuts down on the size of the head as much as possible without sacrificing the ability to be expressive, freeing up the rest of the space for more realistic proportions and more dynamic poses.

Economy of space, in my opinion, ends up being the longest learning process for an artist. When creating the player's first idle pose, I often spend hours tweaking a simple standing pose until I finally feel as though I've stumbled upon the best balance between resolution and detail. The face tends to be the biggest factor. 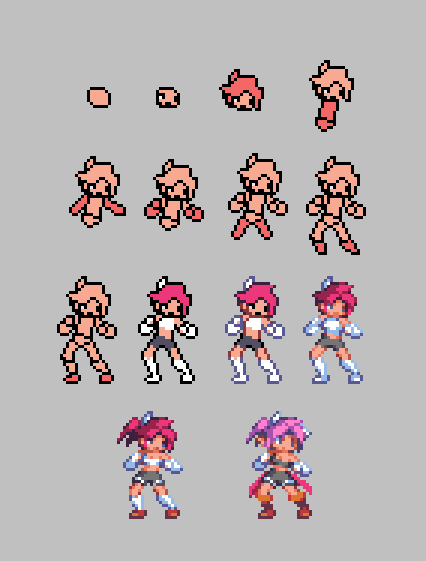 Never be afraid to spend too much time on the initial pose or facial features. The more time you spend on it, the easier it will be to create poses and expressions that you're satisfied with. Nothing is worse than feeling limited by your own work. I can't tell you how many times I've looked at a sprite's earlier state half an hour later and thought "Damn I'm glad I didn't settle for that"