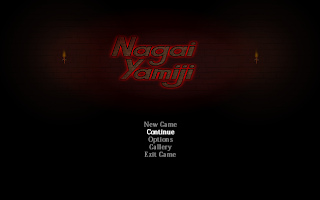 A developer named Kajio completed an action H-game he was working on, so check it out if you haven't already.
http://hkajio.blogspot.ca/p/nagai-yamiji.html

Support him if you can, because the more developers working on games full time, the better.


As for my progress, things are going a bit slow. I'm still running into the same ruts I run into whenever there's story or plot involved (too many ideas), but I'll get through it. I'll try to have a demo out in a month or two, at the very least.

I'll have a bit more to say next time, when I've progressed a it further. 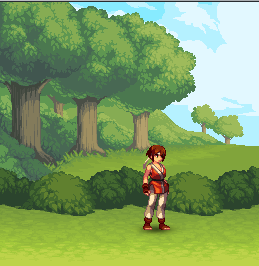 Well, I've mostly been working on the graphics lately. Creating all the necessary movements and such while I try and figure out exactly what the combat and gameplay is going to be like. As it stands, there will be less emphasis on platforming, and more of a focus on combat and exploration (the game is still an rpg  metroidvania platformer, though, not a beat'em up.).

In terms of combat, I may go with something that focuses on directional parrying (up and down). Enemies would switch between the two attacks, and if the player parries at the right time, they use a counter attack that strings back into normal attacks. If the player doesn't have the timing, they can duck under a high attack or jump over a low one instead, the trade off being that each state only has a single hit move (a jump kick and a crouching kick). This would also make it viable for the player to fight with an enemy on either side.

On the other hand, I'm still considering how to implement special attacks. One option would be to have a special gauge that builds up as you parry and avoid damage, maybe having tiers of attacks that can only be used at a certain "focus" level, meaning there would be risk/ reward between using weaker special attacks or waiting to try and use stronger ones at the risk of losing the whole gauge, or at least some of it when you get hit. Or the gauge could raise when you parry and such, but also just raise on it's own. The other option would be to essentially have weaker spell like attacks that are meant to be used in tandem with melee attacks, and it would work like any other game with magic. (spells would be things like shooting fireballs, or stomping the ground causing stone to thrust out of the ground. )

Anyhow, that's all for now. Pretty much just standard "I'm working on it" stuff.

As for art, I've been drawing every day, but nothing really worth posting. I've been practising a certain style as a part of the whole character study thing, but I don't think I have a good enough grasp of it yet to actually give you a run down.