Sorry that I haven't shown much lately. Looking at apartments, houses, doing other misc stuff, packing.

I'll program an enemy and do an H animation for the ongoing game soon. So far I've been doing some stuff here and there, but I need to keep in mind that the point of this is to update it regularly, and make it playable, even in the early stages. Initially I'll probably focus on adding content, and it will be more of a "playground" with H and stuff to interact with, as the real gameplay mechanics are slowly added. 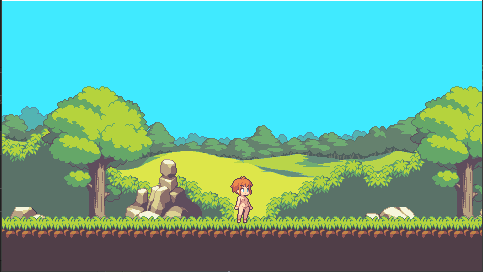 First off, if I didn't respond to your comment, don't worry; I read all the comments, and consider those about mechanics.

One of the biggest roadblocks in deciding on how the metagame will work is the conflict between the desire to make a Roguelite (permadeath, highly randomized, short play sessions), combined with the satisfaction of casual progression of Harvest Moon, and have H content which isn't overtly risky to experience.

My current plan is to have multiple concurrent runs that can go on at once, in the form of different worlds that are linked to each other.

Starting world
Essentially, you would begin the game in a fairly casual world. Not all the content of the game would be available here, and while it would be possible to be defeated, it would not be possible to "lose". H could be experienced casually. The farming element would probably also be more pronounced.

In this world, you would find seeds which could be planted to create "standard" worlds.

Standard world
Standard worlds would be randomized, and could contain most of the content of the game. Some elements would be luck based, and it would be possible to "lose" here. While these would be individual "runs" that could be won or lost, the purpose of them would be up to the player.

For example, if the player is currently doing a run in one world to "defeat the cave demon", they may create a new world with the sole intention of finding an item that will make it easier to defeat the cave demon, without risking the other "run". Some items could be transferred between runs, meaning that difficulty could be controlled somewhat if the player is having a hard time.

"Losing" would be possible, but would not come in the form of literal gameovers. Losing to the Cave Demon might severely limit the player's combat capabilities, or change them. So while it will have been "lost" as a run to defeat the cave demon, it can still be used to experience other content. Most enemies would probably not limit the players capabilities, and would simply set them back in resources. Getting to a point where you are at the mercy of the world's situation yet can't get the resources you need to get out of it would be the closest thing to a gameover, and at this point the player could either abandon the world, or do another run in the hopes that they will get resources to send over. (For example, losing to an enemy might curse you, and you're unable to undo the curse while cursed, yet another run may yield the anti curse item.)

Content you experience in standard worlds would be added to the starting world, albeit without the rewards. That way it can be experienced on a more casual level.

Special worlds
Other worlds could be one-off concepts. For example if I feel like doing a linear scenario, it might be done this way. Or, special worlds might be standard worlds with modifiers that change the overall nature of the run. For example one world might have the modifier of all female enemies, or the inability to use magic, but have stronger melee, etc.

There's also the possibility of making "active" worlds, that progress while you're away. Might lead to a type of gameplay that's more about "fixing today's problems" as opposed to actively playing. These runs might be used to set up farms that yield resources on a more consistent basis, but would become more about managing them with risk/reward, compared to the casual world which would only be low level items. 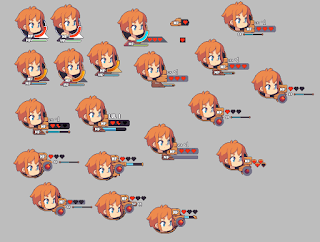 Some hud concepts I was messing with.

One of the things I've been thinking about is whether to use hearts or not.
The Binding of Isaac makes amazing use of hearts as a resource and risk/reward gameplay. However, the downside is that they don't scale with large amounts of health/ leveling up as well as a number represented by a bar.

One of the solutions I've considered is to have a sort of incremental health system using hearts.

Imagine that you have only one heart, and each heart can contain four quarters.
If you have 100 HP, and get hit by an attack that does 30 damage, it would round up to half a heart, and take away 50hp.

Essentially, there would be two stats. You're actual HP, and the number of hearts, which determines the increments of damage you can sustain. As stats, it would probably be something like HP/endurance.

This way, HP could level up, but you could still do resource management where some events cost you a heart container.

Of course, the main problem with this is that it's not exactly very intuitive for the player.

Anyhow, that's all the rambling for now.