There's something I was thinking about today that I struggled with around the time I released Kurovadis. The question of whether or not I should release all-ages versions of the games I make.

On the surface, it seems as though there's no real reason why I shouldn't. Some people really enjoyed Kurovadis, but wish that there was an all-ages version that they could show to people who don't like certain content.

However, what happens when you search "Kurovadis" on google? Assuming you have safe search turned off, the first result is hentai from the game, or a link to my blog. In other words, it doesn't take very long for you to realize what the content of the game is. This may not sound like much of a problem to you, since chances are you're fine with H content. However,  imagine if you played a great indie game, only to discover that in the original game there was a lot of brutal racist content, or something that you saw as morally reprehensible on a personal level. Chances are that's the way some people might feel.

So, what would you do? Would you release the all-ages game under the same name as the adult version? In the all-ages version, would you make it immediately obvious that although not 18+, it's still associated with adult content? Or do you think it's better left as an 18+ game, but with an in-game option that allows you to disable all 18+ content?

I did a random sprite today to see if I could imitate the style of a certain H game. (I'm sure you can guess which one) 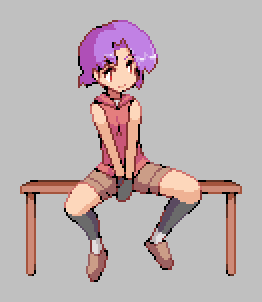 Surprisingly, doing sprites in this style doesn't actually take all that long since there's more emphasis on drawing the lineart. Animation on the other hand, I can only guess. Assuming there's less frames, it might take pretty much the same amount of time as what I'm used to.

Perhaps I'll do something in this style later on. I doubt I'd go with proportions as realistic as the original artist did, though. (He's waaaay better at drawing correct anatomy than I am. And just in general -___-)

Seems as though another developer has jumped into the fray of H-game development. He has a blog which you can find here, 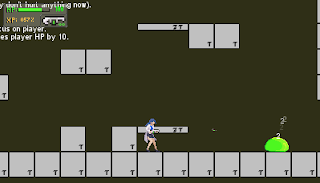 Obviously, he's just in the early stages of development, but I can't tell you how satisfying it is to see that actual attention to detail has been given to the basics. The physics feel solid, there are transition animations, and the H animation isn't just 2 frames that cycle. I've got high hopes for this one.

Check it out if you get the chance.

My game on the other hand, well, it's getting there. I'm currently in the process of creating all the areas and finishing off whatever enemies I haven't done, in addition to optimizing some long standing problems. The game has a few parts that are playable, but I'm going to wait until the game is much more complete before releasing a demo.
Posted by Kyrieru at 11:17 AM 10 comments:

With windows 8's release, I need to take OS compatibility into consideration for future projects.

If you have the time, I'd like to know if you plan on upgrading to windows 8, and if so, when. I've added a poll on the right side of the blog. This may also be a good time for me to consider including Mac support, which I'm sure couldn't hurt.

It seems as though my email has been hacked, so don't try sending anything to Kyrieru@hotmail.com.

If you have any technical difficulties with Kurovadis, use the email address provided on the site where you buy the unlock code.


As for the game, it's going fine. I keep running into one programming issue after another, but in the end they tend to be a result of my stupidity rather than anything else, so that's ok I suppose. The good news is that after I finish this game, I won't have to do much in the way of programming in a platformer for quite a while.

Back to work/sorting out email issues.
Posted by Kyrieru at 7:10 PM 21 comments: