How is Flash for line animation? Fun.

How is it for coloring?

Took at shot at doing something short animation with color. Again trying to figure out an easy way to animate the head without too much fiddling. Kinda failed -__-

Also, if I had one complaint about raster animation, it's that there are no good programs for it..
How difficult is it really to have a simple pencil tool, onion skinning, basic transform tools, and a timeline? Everything out there is mess..

Either way, he has no neck.

It's always an odd feeling when I start animating characters, because I'm so used to drawing hair different every time. With animation, you have to keep it more or less consistent, so it's a bit tougher. I look forward to doing some animations with actual moving hair, though.

Anyhow, maybe next time I'll animate something you guys would actually want to see, rather than boring 3 frame sketches -__-
Posted by Kyrieru at 10:21 PM No comments:

A circle called Pixel factory just released an H game on DLsite. Check it out if you have the time.
http://www.dlsite.com/maniax/work/=/product_id/RJ123294.html/?unique_op=af

Needless to say, the pixel art is extremely well done. The creator also took the time to talk to users on English forums, so he's certainly the kind of developer I'd like to see supported. You can also buy the game from him on his blog.


As for me...Progress on the game is going fine, slow and steady as usual.

My interest in traditional animation was re-kindled a while ago, so I've been trying to come up with a method for drawing people that is also viable for animation. For the first time, I feel like I've finally found a drawing method that get's consistent results. Though, I've yet to find a way to draw heads that works as well. A static image or drawing from different angles is one thing, but coming up with a method that looks right when animated is something else entirely. Hopfully this constant practice will help out with CGs, too.

Also, for the sake of having something in this post, here's another tune I did. This time I might use it for the game. (the melody, not this track)

Not going to name names but...it wasn't very good. To sum it up, great graphics, decent music..and terrible pretty much everything else..

That aside, it made me want to try doing a hand drawn sprite, to see how viable it would be in the future.

This was the result of my first attempt, which took roughly half an hour, 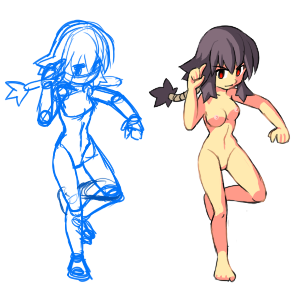 So basically, it would talk about half an hour per frame to animate, but may vary depending on what animation techniques I'd use. This is somewhat interesting, because doing a polished pixel art sprite can take anywhere from half an hour to an hour for the initial pose, yet takes less time to animate. Which, to my surprise, means it might actually be viable to do hand drawn sprites at some point, which would be neat, and probably a good change of pace.
Posted by Kyrieru at 12:21 AM 55 comments:

I guess you could call most of these music posts a bit of a warm up. I probably won't end up using them for the actual game.

This is what an hour of musical brain storming sounds like,
https://soundcloud.com/kyrieru/storm

Anyhow, it's at the point where I need to start doing some music as I design levels, since the music actually kind of dictates certain elements. For instance, I sometimes pace the speed of the player's walk cycle and certain movements based on the first song you hear in the game. I'll also design levels around songs, if I've composed something that evokes certain themes.

Progress on the game is going fine. The core mechanic ended up being completely different than I originally intended, but hey, that's game development for you.

On a side note, here's a Kuro sprite I did because I was bored.