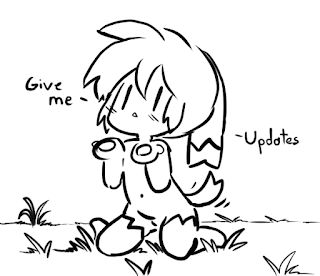 Still working on stuff. Frustrating delay-of-the-day is the need to get some expensive dental work done.

Unfortunately, Aster didn't really sell much on DLsite. They stuck it away in a nebulous shooter section, so it doesn't get the exposure of other action games. While I think that if it were a better game it wouldn't have mattered, it is somewhat frustrating to see it not get a normal chance. Might sell it on Nutaku, but man I really don't want to go through the process of preparing promotional stuff again.

So, I'm currently figuring out what to do. Probably Patreon animations. The dental stuff is time sensitive, so I can't simply wait until a game is finished; which is what I would do if that wasn't the case. Every situation like this kinda just widdles down my patience; I just want to work on games have nothing else to worry about.

After I finish what Patreon animations I need to do, if I need money again I'll probably switch from animations to a patreon game. Even an initial week or two of getting something to a "build on" state would be wasting less time than I do spinning my tires on some of these animations.