I was organizing/clearing out one of my hardrives today, and while sorting some of the images I figured it would be neat to post some of the sprites I was finding.

That said, here are some sprites I did during or between games, when I was trying to decide what to make, or what kind of proportions I should use. I didn't include most of the sprites that have been shown in other places, but I may have shown some of these at some point. 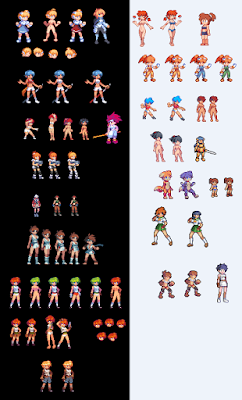 These are enemies and NPCs from Crimson Brave that were not seen in the demo I released. All of them were animated, however none of them had H-animations yet. You can also see that the dog, the shadow thing, and the crow never got the graphics upgrade that the others did when things got more detailed half-way through. 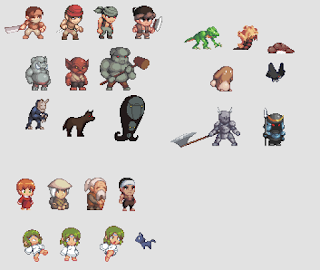 Like with the other sprites, I won't bother showing ones that have already been shown before. (For the most part.)

These are sprites from the medium-resolution metroidvania I worked on before Eroico. About half of these were fully animated, but only a few had H-animations done. 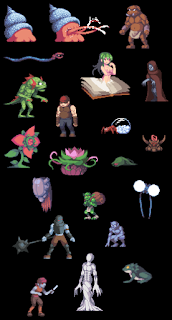 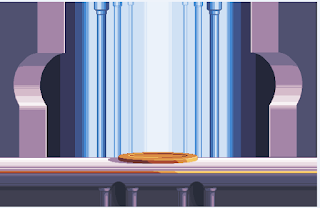 These enemy sprites are from the martial arts game I worked on briefly. All but one were animated, but no H-animations were done. 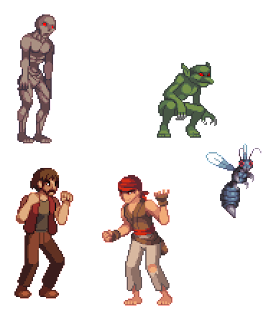 These are from the low-res metroidvania I started after working on the high resolution one. You can see that three of the enemies were the same as the ones above. Most of these were animated, but only a demo's worth had H-animations. 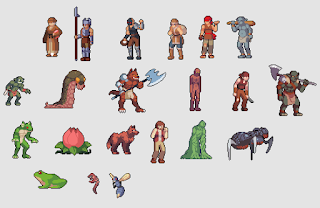 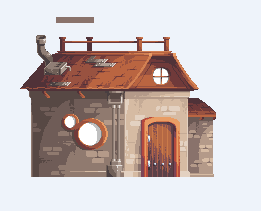 Next, here's some unused stuff from Kurovadis. The first sprite is actually the first sprite I made, and what the protagonist looked like for a while. The Kuro sprites were some variations I considered. The enemy sprites were nothing more than single images of enemies I had planned. The spike thing was going to spin, and let you stand on the flat part. The tileset was for an ice level I had planned, but scrapped. 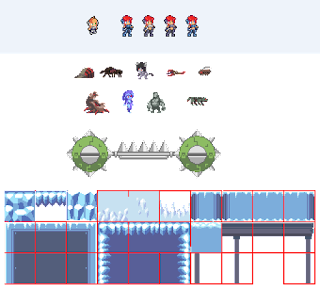 Lastly, some unused stuff from Eroico. I had various expressions done, but I pretty much just forgot to utilize them. There are two enemies I never ended up making, and the rest are sprites from when the game was actually going to be like Pacman 2, with turn based battles. 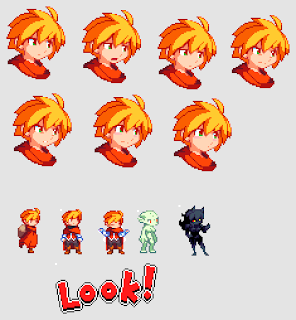 Also, here's something unused from the desert stage, which the mummy would have used to spawn.

Anyhow, that's all for now. Update time I guess.

I'm still working on Noaika, still taking it slow. One of the main things I want to get right is the H-animations, and taking them to a level that would actually be good enough for me if I were a player. One of the things  that always dissapoints me when I play H-games lately, is when an animation is nothing more than a stage or two of animation. It isn't really enough for me personally. I need more context, and things that make my imagination run-wild a bit more.

So, I'm focusing on making a lot of stages, and H-scenarios that tell more of a story, either in a short time, or over time throughout the game. Essentially, the kind of thing I'd want to see if I were playing myself.

Also still considering if I want to include text in the game or not. I've been playing with the idea of giving every enemy (that could speak) unique dialogue, 3-5 different lines for each, for different situations. Even when it's simple, I think text really helps make H-scenes feel less shallow (For example, Hounds of the Blade adds a lot of context), and I think it would make the world feel a bit more alive.