It's pretty difficult to make layouts for metroidvanias. Interconnected areas, alternate paths, it's something that requires a lot of thought to do well.

A lot of people call Kurovadis a Metroidvania, but I think it lacks a few of the key elements. For one thing, with the exception of one area, there are no alternate paths, it's linear. The most you can do in Kurovadis is go somewhere that you aren't supposed to be yet, and get a minor power up (which are the same as just leveling up) so you aren't just reaching a dead end. Another element it lacks, is any interconnectivity. Every "stage" has one only entrance, the exception being the mansion, which has an entrance you can't go back through, and an exit. It's still basically just entirely linear.

Here's what I would call a basic metroidvania "loop" 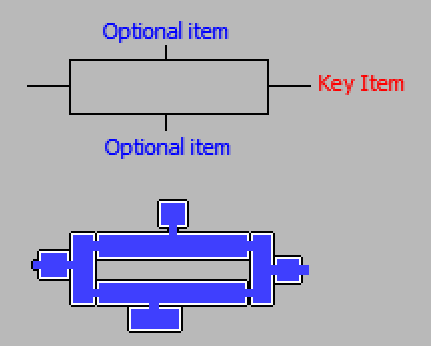 From the location the player starts in, there are two alternate paths, both leading to the same key item. However, both also contain optional items. This gives each path it's own significance, as opposed to simply being alternate "routes" to the same goal. That way, even if the player gets the key item and knows where they can go in order to progress, they may want to explore further.

Simple right? However, it isn't always so simple. 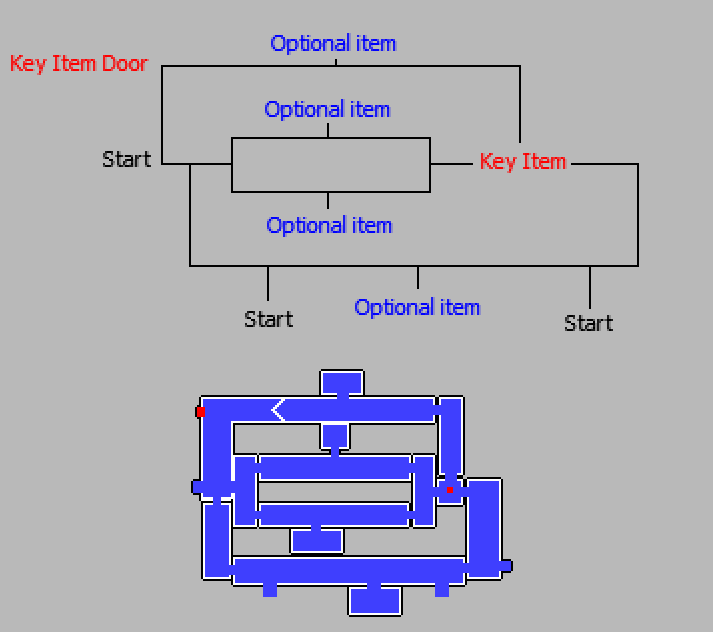 Sometimes the loop encompasses multiple paths, or parts of other loops, and the player may enter the loop from different locations.
And that's just coming up with the layout..

What if you have an enemy that's seen by the player for the first time in that loop? In a linear game, the first encounter is often the easiest, and the player adapts to harder encounters with the enemy over time. But in a loop, the player could be coming from multiple directions. So where do you put that "first" encounter with the enemy? Everywhere? At every entrance? Do you put on your sunglasses and tell them to deal with it?

The answer is the all encompassing vague game design answer "It depends..."

Thus far, making a good layout is something I'm still struggling with. However, I think it's also something that's very important for me to learn to do properly. The more I know about making a good map, the more I can go back to worrying about making good rooms/levels, without being unsure of their place in the grand scheme of things.