Had the urge to work on the attack animation. There was something I wanted to try, and while I'm not fully recovered yet, working is a lot easier than packing, for now.

Anyhow, the other day I posted this attack animation that I made for the ongoing game. Basically it would be used for every weapon, with different weapons being drawn over the frames, and different speeds being used for different types.

Problem is it's a lot of frames (9, not counting the idle frame). Because I have to do a sprite for every set of clothing, it's best to limit the number of frames. I also started to think that it might be a bit boring to just have a single hit attack.

So I tried animating an alternative mockup, with the goal of #1 limiting the frames, and 2# making it a multi hit that could loop.

I managed to get it down to 6 frames, where the actual animation would be done in code, and frames are re-used. The weapon animation itself would then be more frames than the base animation.

Depending on the weapon, the swing can also be slightly different, using the same frames.

I may also add other attack frames that can be used to for special attacks. I could probably get away with doing 1-2 frame attacks that use the attack animation's startup and ending frames to smooth them out. 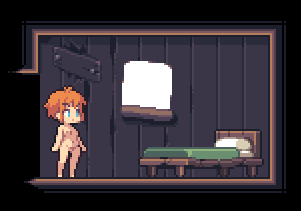