Because none of my large projects will be finished for at least a few months (And because I don't like posting spoilery stuff), I've decided to start something that gets updated regularly to help fill the content gap as I work on larger projects.

Basically, it will be a free game that starts out simple, and is slowly expanded upon. Every time I change or add content (hopefully something small every week), I'll update the version on this site, and it will be playable regardless of the state. (as opposed to long periods of time between huge updates)

I was going to switch my Patreon to a project like this given that game content is easier for me than high res animations. However with the sales of Eroico, I don't really have any financial concerns at the moment. So instead this will mostly just be something fun to people to mess with.

I'll be talking about the process as I go, what I'm doing, what I plan on doing, etc.

First thing on my list of things to do is come up with the idle pose for the protagonist, and the overall style.

Because I want the game to be easy to work with, it can't be too high res, but I also don't want it to be too small, given that I almost always regret using small resolutions later. In addition to the resolution, I also need to decide how many colors to use, given that certain shading styles can slow down the process, especially with tiles.

For now, I'm trying to stick to 3 shades per color. 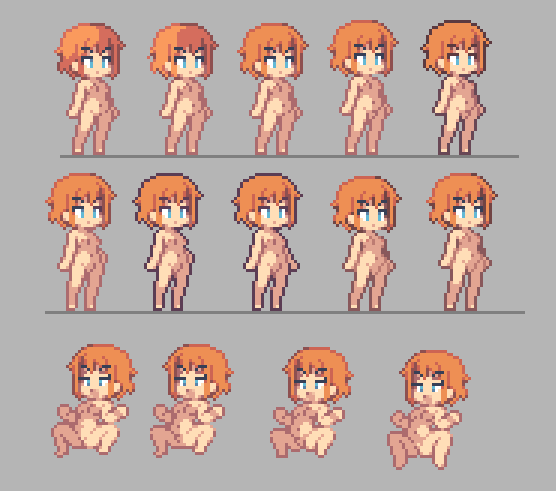 My plan for this game is something I've spoken about in the past,

Basically I want to make something re-playable on a weekly basis, as opposed to something linear like you'd see in some enty projects that get updated monthly.The game will be an action platformer with some harvest moon type elements, and will probably become more rogue-like over time.

In initial versions, the game won't have many bells and whistles. The first goal is making the player animations, an enemy, and an H animation. That way, as the long term format is built up there's still new H on a frequent basis to make it worth playing.

It may be a few weeks before the first playable update, as I'll be moving very soon.
However I'll still be posting updates on graphics and the like as I make them.