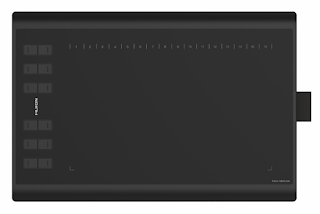 Quick sort of review of the Huion H1060P

I've been using a Wacom Intuos large for around 8 years, and it's worked spectacularly the entire time. However, the one I have has three disadvantages. 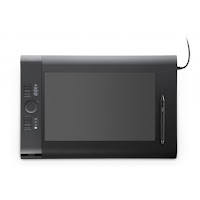 1. It's huge, so drawing can lead to shoulder strain.
2. It takes up a lot of space on my desk, which causes me to have to stretch to reach my keyboard. (My keyboard rests past my tablet, in front of the monitor.)
3. It has large boarders around the active area, which leads to more wasted space.

New wacoms have fixed the boarder problem, however I figured I'd give the Huion I shot because of the price, $74.99 USD, compared to the wacom, which is $349 USD. Since it also has smaller boarders.

Getting past the fact that it feels weird to use a different tablet after 8 years, here's what I consider to be the most relevant factors.

1. When pressing down the stylus, the nib pushes in slightly depending on how hard you press. A small portion of this range is a deadzone, and the pen will not register as drawing until it's beyond this point.

This is not the end of the world when drawing with things like ClipStudio or PS, Sai, etc. Generally a light touch will be 0 opacity or 0 width when drawing anyway. However, for pixel art it ends up being more of a problem, since you are often doing single "clicks" to draw single pixels, and a touch that's too light will sometimes not go past the deadzone. This is also a factor when clicking buttons in menus, etc.

2. The stylus is still detected when it's a short distance from the tablet. However, if you hold a button and move the stylus around above the tablet (such as holding middle mouse to move the view), the range is slightly shorter than the Wacom, and I find that when I'm not paying attention, it will cut in and out of detecting the button press because the stylus is too far away.

3. The Stylus feels rather cheap, and I find the shape to be inferior to the Wacom. It's somewhat slippery and plastic feeling, and my hand tends to drift farther down the pen since it tapers. Wacom's stylus flares out at the end, which prevents your hand from going past a certain point. It also has a rubbery texture which makes it easier to grip. The Huion makes more of an audible clicking sound when you touch the stylus to the surface, whereas the Wacom does not.

It's possible that you could use a normal pencil/pen grip to fix some of these problems.

- If money is not a concern, buy a Wacom Intuos pro medium.
- If money is a concern and you will only do pixel art, a Wacom intuos pro small or a non pro version may be best.
-If you can't afford an intuos medium, and will mostly be drawing, then the Huion will do the job.
While the stylus feels cheap, the tablet itself does not.
- The extra $275 could buy you a monitor, a keyboard, a graphics card, or any number of other upgrades that may benefit you more than an intuos pro.
-The tablet buttons, the fact that the stylus needs to be charged and lacks and eraser are not relevant to me at all, however they may be to you.

Some of the Huion's disadvantages are also things you could get used to, or may not even notice if it's your first tablet .

Anyhow, after this I'll be taking a look at Wacom's current tablet line. It's possible that a none pro might be the sweetspot for my uses. I'll use the Huion for a while longer, but it will probably stick around as a spare.
Posted by Kyrieru at 6:08 PM