Status update, concept for next game. 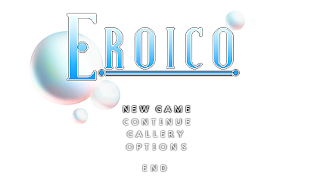 In terms of length, I'd say Eroico is shorter than Kurovadis. However it has more CGs, 15 to Kurovadis's 9. There are a total of 3 levels, and 15 enemies with animations. Use that to consider if you feel like buying it or not, but also keep in mind that it will be funding the next game, as usual (I won't be using offbeatr, for now).

Buy the full version
(Make sure you download the updated demo first, since it's required anyway, what you're buying is an unlock file)

I've more or less been taking a break for the past few days. And by taking a break I mean casually fixing bugs and implementing the "gallery" for enemies, which I finished today. (rather than working all day like a maniac). The game will be uploaded to DLsite after I finish fixing a few more bugs.

I've also been thinking quite a bit about the next game, things like the theme, and general gameplay. Nothing is really all that certain at the moment, but I can say that I want to take a step towards making something more complicated. Or at the very least, something different. Though still practical, if I can manage it.

Some things I'll get out of the way about the new game, before I begin,

1. It will be sci-fi themed.
2. It will have a female protagonist.
3. It will be an action platformer Metroidvania.

The concept I've been juggling in my head goes something like this, (without spoiling the plot I have in mind)

You are on a foreign world, which is inhabited by monsters and beasts of various kinds, ranging from biological horrors to local (but alien) wildlife. Aside from basic stats, your advancement focuses on two things that are central to gameplay,

1. The first is technology, such as guns, traps, jet boosters, etc, which are created using parts you find in the world.
2. The second are biological enhancements and skills, such as health regeneration or special powers, which you gain by studying/learning from enemies,

To study enemies, first you have to capture them through various means, putting them into a designated area for containment. However you also have to make them happy, and keep them alive over time to learn more. There are a number of basic ways to keep them happy, but needless to say, some of them don't mind "alternative" means.

Among the basic methods of keeping the creatures happy is feeding them the correct foods or giving them certain items, which you can find scattered across the world, by killing enemies, harvesting plants which appear at random in certain areas, or fishing.

The game would work on a day cycle, with the state of each area changing daily, switching enemy locations and randomizing things like plants, or other useful items.

In addition to the changing environment (exploration areas), which would be based more on advancement and acquiring items, there would be other more important areas which do not change, which would fill the role of more traditionally designed levels. These levels would be the primary reason for advancing your character and acquiring certain technology, as they must be overcome to unlock new areas. The basic layout and game flow would be like this, 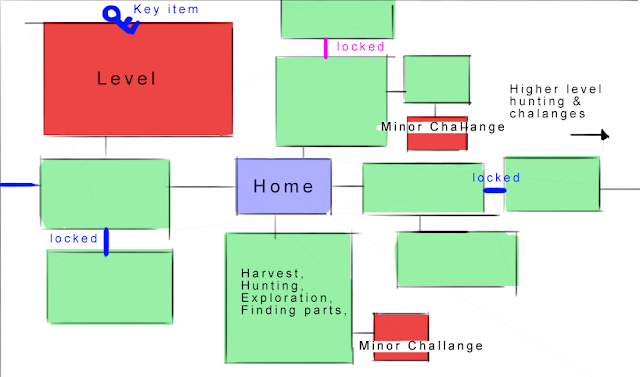 Notice how I didn't spell challenge correctly. Not once.

You have a base of operations, where you begin each day, and keep contained creatures (home). From there, you enter exploration areas, where you find parts and items. Once you have the necessary technology, such as a weapon, you would hunt down enemies you are strong enough to defeat, or have the necessary items to capture.

The day ends after a given amount of time. Areas are randomized again.

You begin a new day, and start at home. First you try feeding the creatures, or try something else entirely. You once again begin exploring, and discovering new areas and technology, becoming stronger, possibly farming certain items each day in order to level up creatures or make healing items.

Being more complicated, there are some considerations I may have to make in order to make it more practical. Here are some things I would want to include, but would probably leave to a sequel.

1. No day night cycle. There would simply be an "end of day", and the character sleeps at night.
2. Only certain creatures could be captured, not all of them.
3. Creatures would only have one enhancement each, and the happiness level would increase it's effectiveness, rather than giving new enhancements. The nature of the creature's happiness could effect the enhancement, but might be better left out.
4. Could only save at the beginning of each day, so that harvested items and locations don't need to be saved. (thousands of variables)


5. Possibly leave out leveling up, leaving progression to technology and enhancements instead,
6. Each enemy merely needs to be defeated and captured with a certain kind of trap, rather than having unique circumstances for each.

Anyhow, that's enough brainstorming for now. I've gotta get back to fixing bugs.
Posted by Kyrieru at 1:38 AM