For those of you who are wondering why I haven't posted an update in a while, I actually did write a few posts. One about piracy and poor commercial software practices, one about the story of my next game, and one about a Castlevania game I played recently and how games have changed over the years. I just didn't publish any of them, because I'm a perfectionist and couldn't put what I wanted to say into words. (I probably only publish 60% of the posts I write, seems like a lot of them just turn into me talking to myself and convincing myself of what to do.)

Oh, and and I went to the hospital to get some symptoms checked out that are often indicative of cancer. I don't have cancer, though, so that's good.

Now, to give you an update on my next game. I'm not going to go into it too much, but I will say that it involves ghosts who possess people and creatures, and a lantern that can capture them, represented by the flame it burns. Make of that what you will, and feel free to guess what the hell the game will be like. 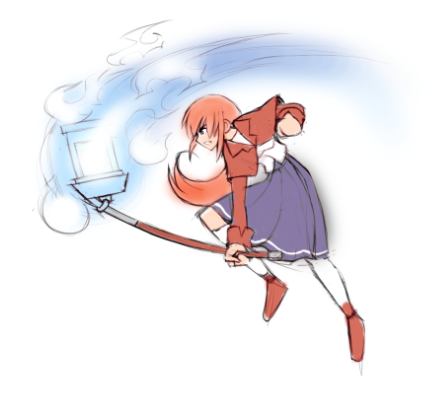 The character design for the player won't be either of the earlier concepts. Originally, I came up with a plot for the knight (something with a different setting and gameplay), but decided that it's not something I want to tackle just yet, for various reasons. I've yet to come up with the final character design.

That aside, I'll be starting the game in the next few days. Not just thinking about what I want to make, or working on the template, but starting to work full time. Break's over. Within a week after starting I'll have everything planned out, in terms of enemies, locations, etc. It's gonna be...a lot of sketching. In between being burnt out from drawing, I'll also be making some music, since it also helps me brainstorm and get a better idea of the tone I want to go for.

The planned development time for this game will be 4 months from the time I start, unlike Kurovadis, which could have been completed in two months, if I had been doing it full time, like I will be from here on out.