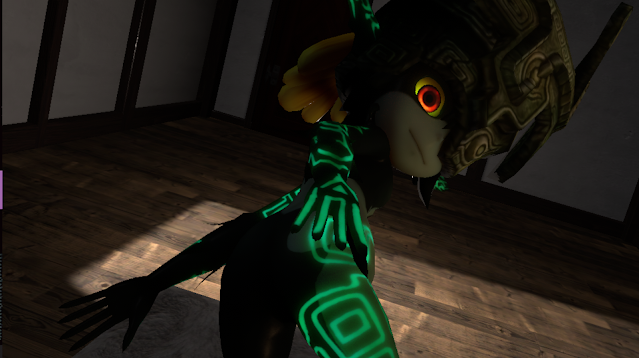 Download
(Should work with Steam VR now, if you set the controls in the SteamVR window)
A while back I messed around with VR in Blender. I was annoyed with the lack of tracking, and so decided to try making a VR template for characters in Unity. I recently came back to it and got things working (Programmer I mentioned before also helped with certain problems)

So, here is a little VR sim, currently with Midna. I will probably release the project file once it's a little more developed. (Though who knows when that will be, since this project is just for fun)

For this to work, you must have a VR headset. It may also only work on particular Occulus versions, due to the controls, though this would be the first thing I fix.

Controls:
A button: Move the view
Trigger 1: Grab and drag limbs, or the character by clicking on her hips.
Trigger 2: Hold and press left/right to spawn a dick and change it's size. Press up/down to change it's offset. She will thrust if over top of it.

There are a few things I plan on adding to it over time. Feel free to suggest stuff, though keep in mind that I'm not a wizard programmer, and some quirks are merely a matter of "I couldn't get it to work".
Posted by Kyrieru at 9:13 PM