Right now I'm in the process of adding the tiles to all the rooms, and choosing the locations of certain powerups.

It a little hard to decide where to put certain powerups, because of how much of a difference it makes to the game's flow and length. There are more or less two different ways of placing them,

The first extreme, is that only certain powerups are essential to the game's progression, and everything else is just optional. 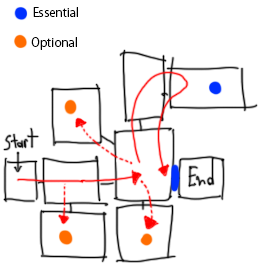 This kind of progression would more or less be based around the idea that there isn't really a "wrong" way to go. Every optional path rewards the player's exploration.

The other extreme is to make it so that most of the powerups are essential, meaning the player can't really go off the beaten path. Instead, powerups would have to be acquired in a certain order, and there would be frequent backtracking 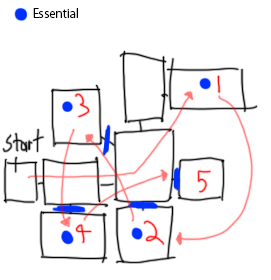 In this case, rather than backtracking being a possibility, it becomes a necessity, since the player must obtain the right powerups in order to progress, some of which might be far back, and yet inaccessible in the beginning.

So the question is..how much do you want the player to backtrack? Is there a satisfaction in seeing a blocked path, and then finding the solution? That image of something unobtainable in the back of your mind until finally you have the means to acquire it? Or is it better to give the player the freedom to explore? Does the player lose the satisfaction of finding the right way if there are too many "right" ways?

Obviously, the answer is probably somewhere in-between. For instance, every powerup may not be essential to "progress", but you could make them essential to "explore", that is, finding certain non-essential powerups. Or, powerups that are essential to progress could also be used to find certain optional powerups.

With the current game, I went a bit too far towards the first extreme. Since I focused so much on alternate paths that can all lead you towards progression, there aren't many blocked paths that you see in passing. There are very few "Ah-ha!" moments wherein you obtain the means to enter a blocked area that had been constantly tantalizing you to that point.

Also, I'll probably be doing a stream somtime soon. Dunno what I'll be doing during it. I'll probably be tiling rooms, I could work on some sound, or some other stuff. (I still need to do music, but music would probably be really frustrating to watch..)