Alright, here's the demo. Keep in mind that it's still pretty rough around the edges since I just wanted to get something playable released for now. There's still quite a bit of graphics, sound, and music missing. Some of it is temporary, like the boss music, which was slapped together in around 15 minutes just to have something there. 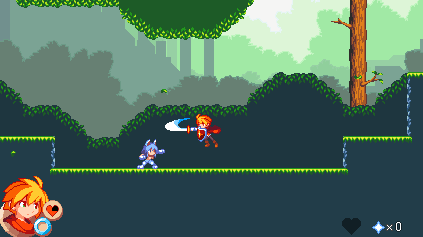 Spell: Up + Attack
Dash slash: Down, Right, Attack
Downward spin: Down + attack in air
Downward stab: Double tap down in midair.
Block: Hold down on ground.
Dodge: Spacebar is the default key

Known glitches:
- The options aren't fully implemented yet.
- The blue crystal things are wonky.
- Apparently Rocks are capable of feeling love.
- A bunch of graphical stuff.

Things that will be in the game later:
- Animation for jumping and using spell.
- Gallery
- Enemy arena
- Unlocked CGs as higher-res files, free of gameover text.
- Missing graphics and music. (such as when you run out of health)
- Working options
- Timer for speedruns
- Beginning and end of stage graphics
- Boss H animations
- H animations will have affects (thus the red and blue bar)
- Other stuff

Take note of when you die the first time, if you do at all. I'm interested to know how difficult the game actually is for other people (for me it's just too easy, and thus hard too balance). If you want to take the time to screencap your first playthrough, that would be even better.

Also, keep in mind that this is supposed to be simple. Very simple. If you're expecting game of the year, you're going to be disappointed.