Well, I've spent the last few days doing sprites, mostly. I'm trying to decide on the proportions and design of the main character. Until I do, everything is pretty much at a stand still, but obviously it's not something I can rush on, so it's a little bit frustrating.

In the mean time, I took a look at an H game that came out recently on DLsite,
http://www.dlsite.com/maniax/work/=/product_id/RJ112746.html

A bit rough around the edges, but not bad at all.

While playing, I wondered what the size of the sprites might be. At a glance, I though they looked to be fairly small. Out of curiosity I compared the size to Eroico's sprites, and was surprised at how large they actually are.

As a challenge to myself, I did a sprite to see what I could do in the same amount of space, since I usually just do smaller sprites. This is what I ended up with, 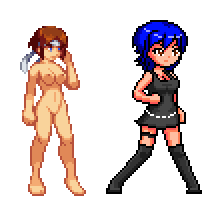 I gotta say, doing an entire game in this style is pretty tempting. It would certainly be more satisfying, artistically. By comparison, the alternative would be something like these, (in terms of size)

The problem in deciding is that size doesn't always equal faster work. Sometimes the trouble of trying to work within a small space actually makes things take longer, because I'll struggle to achieve a certain look with what I have (only a few ways to make a small sprite smile, for instance). On the other hand, with larger sprites you have more to work with, so it's easier to define shapes, but there's also more room for error, and animation becomes more time consuming.

In other words might just bite the bullet and do larger sprites, but I haven't decided yet. I'll have to sleep on it, I guess.